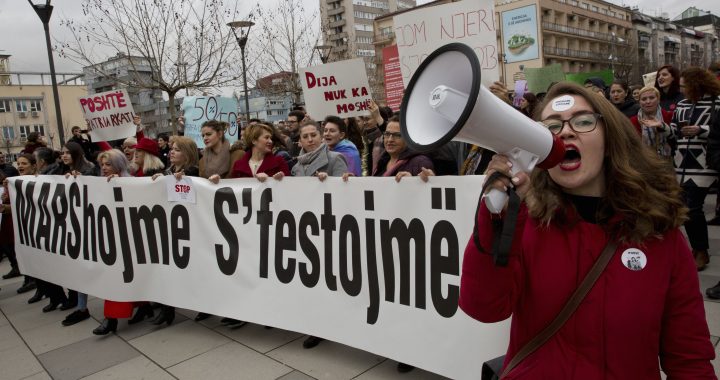 Angry but unwavering, the organizers of Marshojme S’Festojme, or ‘We march, we don’t celebrate,’ are as ready as ever to lead the annual march held on International Women’s Day on Friday.

March 8 marks International Women’s Day, and the collective Marshojme S’Festojme, We March, We Don’t Celebrate, are mobilizing once again to lead the protest. Beginning at 12:00 from the Zahir Pajaziti Square in Prishtina, the march will proceed around the city center, past the Newborn monument and back towards Mother Teresa Boulevard.

2018 was marked by violence against women – the murder of Valbona Nrecaj and her daughter, the rape of an underage girl involving employees of public institutions and institutional negligence of Kosovo Police towards domestic violence are only a few of the cases that have sparked public outrage in the last twelve months.

Organizers of the march and members of the Marshojme S’Festojme collective, Krenare Loxhaj and Adelina Tershani, were at a loss when trying to organize a specific theme the protest would tackle.

“We first thought we should focus on working class women and unpaid labor; economic independence is the only way to achieve gender equality,” said Loxhaj. “But given the latest events with sexual violence and cases that really shocked everyone, we couldn’t ignore it.”

Demonstrations in cities across Kosovo erupted at the beginning of February in response to the arrest of an officer of the Kosovo Police for the rape of a minor in Drenas, to “protest against the legitimized violence within the Kosovo Police against women and girls,” said the Youth Initiative for Human Rights.

“It was emotionally draining, you see something that horrible happening, it makes you think ‘Where do we go from here? What have we actually done so far?’ We’re still dealing with these atrocities,” said Loxhaj.

Tershani said that the march aims to target institutions that must have a better response to gender-based violence.

“Through the march, we attempt to change attitudes and raise awareness amongst men and women about the violence and discrimination in all spheres of life, public and private thus increasing active citizenship and feminist activism,” she said.

Friday’s march will also be taking place in the cities of Prizren and Ferizaj for International Women’s Day. The organization of the former Kosovo President, Atifete Jahjaga, will host a conference on Friday at 10:30 at the Swiss Diamond Hotel titled, “Giving voice to survivors of sexual violence in conflict.” This will be followed by a performance from music artist Andrra at Kino Armata from 20:00.

The shortcomings of societal and political approaches to gender-based and sexual violence have come to the fore, according to Loxhaj, and this escalation is supported by the aims of Marshojme S’Festojme.

“We have one focus that we want to bring forward, to have women, girls, boys, men who are not necessarily familiar with gender equality or feminism, to identify with the protest,” she said. “When you have multiple messages in a protest that you want to deliver, it’s easier for people to identify with and support the cause.”

Tershani said that civic activism is growing, especially among young people, particularly spurred on by cases like that of Drenas.

“Many people who don’t identify with the feminist movement have joined our protests because of the demands of the collective for social justice, rights in the workplace and end to inequality and poverty,” she said. “The demand for an inclusive and diverse society has also brought together marginalized communities in the united struggle for equality.”

This growth in support is a reality in other ways, according to Loxhaj. Despite the tragic events that occured over the last year, 2018 still marked positive steps toward emancipation of women in Kosovo.

Societal backing for gender equality has become more meaningful and coordinated, said Loxhaj, and public institutions have responded positively to demands for change in the law, in policy and in the court system.

Amendments to both the Law on Inheritance and the Law on Family have been proposed to aid women in claiming their property and inheritance rights in Kosovo. In 2017, only 12 per cent of women in Kosovo were registered as owning property, according to the Kosovo Agency for Statistics, KSA.

“Not that I want to discredit people in power and in decision making positions, they are definitely contributing to these changes, but I don’t think that this would have happened without the pressure coming from below,” said Loxhaj.

KSA statistics confirmed that women remain underrepresented in decision making positions and the labor market, with the most recent Labor Force Survey from 2018 outlining that on 12.6 per cent of working age women were employed, compared to 46.6 per cent of men.

The Kosovo Police Department for Serious Crimes reported a slight increase in the number of women who come forward to report domestic and sexual violence, from 889 in 2015 to 995 in 2017. There was also a marked increase in reports of sexual abuse to the Kosovo Police in response to the publicity following the Drenas case in February.

For this trend to continue, active acknowledgement of the problem and support from people in decision making positions remains crucial, said Loxhaj.

“We need commitment and promises from these leaders that change will actually happen,” she said. “Last week was the first time someone has been sentenced to life in prison for murdering a woman, and we need institutions to take charge and recognize that they have a lot of responsibility. It has to go beyond public support.”

The Court of Appeal ruled last week on March 1 that Pjeter Nrecaj will serve life in prison for the murder of his former wife, Valbona Nrecaj, and their nine-year-old daughter in the village of Brekoc. The Court cited the years of domestic violence that Nrecaj suffered as justification for imposition of the extended sentence. This was the first time a sentence of this length was handed down by a court in Kosovo.

Demanding not just gender equality but safety, health and employment equality and standing up against sexism, racism, transphobia, the multitude of issues that Marshojme S’Festojme are fighting for can be exhausting, said Loxhaj, but the organization refuse to leave any issue unaddressed in their broad agenda.

“Last week showed that action really can be taken. The law is there to ensure our safety, security and our right to live as human beings and it needs to do that,” said Loxhaj. “Until these things that aren’t being dealt with are addressed, we’ll have equality for none and justice for none.”