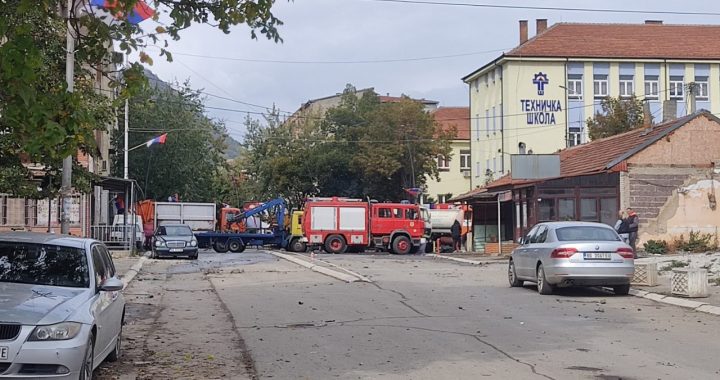 Several police were injured and journalists attacked in Serb-majority northern Kosovo after police undertook an anti-smuggling operation in the area on Wednesday.

Kosovo Police clashed with Kosovo Serb protesters in the divided northern town of Mitrovica on Wednesday as they conducted an operation against the smuggling of goods in the town.

Kosovo Serbs threw different explosive devices at the police and put up blockades of trucks on roads close to the technical high school in Serb-run North Mitrovica.

Police announced that six police officers, five ethnic Albanians and one ethnic Serb, were injured during the action in Serb-dominated northern Kosovo and returned to the other side of the river Ibar of the ethnically divided town.

One protester involved in attacking the police was wounded, the police announced. Serbian authorities claim that he was shot in the back by police and taken to a hospital in North Mitrovica. Surgeon Zlatan Elek confirmed the information to the local Kosovo Serb language news portal Kosovo online.

Police said they had launched a broad operation in 28 different locations against smuggling goods in several towns and cities, such as Pristina, Peja/ Pec and Mitrovica South and Mitrovica North.

On court and prosecution orders, “Checks and raids are being carried out in various locations such as residential houses, business premises, warehouses of goods, etc,” they said.

“As a result of intensive investigations and professional actions of the Kosovo Police and Customs, so far various goods and evidence have been seized, which serve as material evidence,” the statement reads.

The police action rapidly ended but some local businesses in Serb-dominated North Mitrovica closed and local Serb citizens protested against the police operation there.

Police said they had arrested eight suspects for smuggling goods, six of them ethnic Albanians, one ethnic Bosniak, and one ethnic Serb, from all over the country.

“We will fight and prevent smuggling… Today’s operation is over. I call on citizens of Mitrovica North to not fall prey to some Serbian media, which defend crime, corruption and smuggling and want to politicise and ethnicize it,” Kurti said.

Minister of Finance Hekuran Murati specified that the operation was directed “against undeclared goods and those without banderoles”.

The latest violence comes after Serbs started a blockade on the border with Serbia, and Kosovo deployed Special Police to the border area after the dispute erupted on September 20.

This was over Kosovo’s insistence that vehicles with Serbian license plates must change to temporary Kosovo ones when they enter the country, as Kosovo vehicles must do when entering Serbia.

Under a three-point agreement reached between Kosovo and Serbia, under the EU-facilitated dialogue, in Brussels, on September 30, stickers will be placed over each country’s insignia on number plates at border crossings in order to cover them up.

On October 2, NATO peacekeeping forces in Kosovo, KFOR, were deployed to the north to remain for two weeks in order to maintain safety and security.

Serbia’s Kosovo Office head Petar Petkovic confirmed that one person had been shot from a firearm in Kosovo in Zvecan.

Gunshots were also reported in Zvecan.

“Now, the first drop of Serbian blood has fallen in Kosovo and Metohija, and we warned that this must not happen,” Petkovic told a press conference in Belgrade.

Petkovic accused the Kosovo government of causing tension, saying that “from day to day, they generate a new crisis with the goal of trying to create a new reality”.

Serbian Prime Minister Ana Brnabic on Wednesday said that “a clear reaction is necessary in order to stop the crazy policy pursued by Pristina”.

“The situation is more than dramatic and this is the last moment in which a clear reaction is necessary in order to stop the crazy policy pursued by Pristina. This kind of behaviour has exceeded every measure and brings us to the brink of chaos”, Brnabic said, Tanjug news agency reported.

Kosovo Serbs protesting against the police action against smuggling goods in several Kosovo cities, including Serb majority North Mitrovica, attacked journalists going to the scene with rocks and Molotov cocktails.

BIRN’s team was also chased by the protesters who were throwing Molotov cocktails.

Several citizens had gathered and formed a barricade in the road that leads to the Kosovo Serb-majority municipality of Leposavic.

Journalists of Local Kosovo Serb language media, Kossev, also reported threats and attacks on them after which they decided to withdraw journalists from the field. Two border crossings in Jarinje and Bernjak, in Serb-dominated northern Kosovo, were blockaded by Serbian protesters for 13 days, in September.