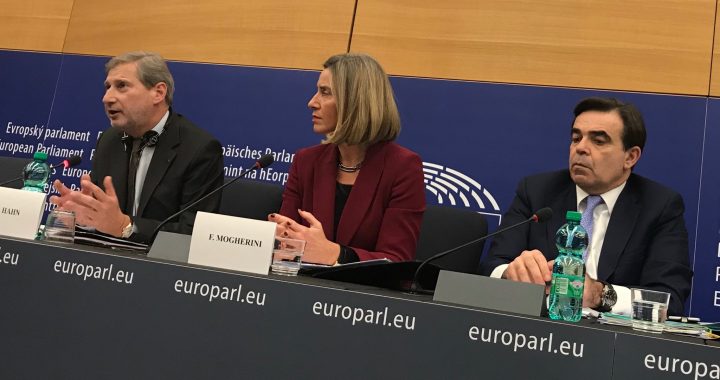 As some Balkan countries look to 2025 for possible accession, the European Commission has tied Kosovo’s EU path to the SAA, cooperation with the Specialist Chambers, and normalization of relations with Serbia.

“Our Union must be stronger and more solid before it can be bigger,” says an EU strategy published today, February 6, on enlargement perspectives for the the Western Balkans.

Presenting the strategy, High Representative of the Union for Foreign Affairs and Security Policy and Vice-President of the Commission Federica Mogherini said that it contains “a shared, unequivocal, and concrete perspective for EU integration for each of our six partners.”

The strategy says that candidacy negotiations with Montenegro and Serbia are “well underway” and that “with strong political will, the delivery of real and sustained reforms, and definitive solutions to disputes with neighbours,” both countries could be ready for EU membership by 2025. Still, the strategy says, “this perspective is extremely ambitious.”

The strategy says that the European Commission, EC, is ready to prepare recommendations for Albania’s and Macedonia’s accession negotiations, and that Bosnia and Herzegovina could also become a candidate. The strategy says that Kosovo has “an opportunity” for progress, and focuses on ‘normalizing relations’ between Prishtina and Belgrade.

“A comprehensive, legally binding normalisation agreement is urgent and crucial so that Serbia and Kosovo can advance on their respective European paths,” the strategy reads.

This point was emphasized at the presentation of the strategy in Strasburg by Commissioner for European Neighbourhood Policy and Enlargement Negotiations Johannes Hahn.

“It is not only in the interest of Serbia but also for Kosovo to find a positive solution, because this would pave Kosovo a way towards the EU,” he said.

The EC also highlighted transitional justice processes in the region, mentioning the necessity to cooperate with justice mechanisms, particularly the Kosovo Specialist Chambers.

While the strategy foresees accession negotiations and potential candidacy status for other countries in the region, the tool for Kosovo’s EU integration is the Stabilization Association Agreement, SAA, approved in January 2016.

“Kosovo has an opportunity for sustainable progress through implementation of the Stabilisation and Association Agreement and to advance on its European path once objective circumstances allow,” the strategy says, using the status-neutral asterisk referring to UN Resolution 1244.

At a press conference in Prishtina on Tuesday, Head of the EU Office in Kosovo Nataliya Apostolova said that these “objective circumstances” refer to the implementation of the SAA agreement.

“There is no political meaning, as some have tried to portray in some discussions. This is a purely technical criteria,” she said.

Earlier this month, Deputy Prime Minister Enver Hoxhaj claimed that he saw a draft of the enlargement strategy and raised concerns about what he called the EU’s “selective approach” towards the Balkans.

The strategy was also a controversial topic in the EU itself before its publication, with Spain insisting that Kosovo should be excluded.

On Tuesday, EU leaders aimed to emphasize that Kosovo is not singled out among the five other Western Balkans countries.

“We are talking about the perspective for all the countries in the region. This clarification was necessary and we have said it several times,” said Hahn from Strasburg.

Apostolova stressed that the enlargement process is merit-based, with no prescribed timetables.

“There is no distinction between Kosovo and other countries in the region… the conditions, commitment, and support from the EU are all the same,” Apostolova said from Prishtina. “Kosovo was the last partner to enter the race… it is up to Kosovo [leaders] to prove they can catch up…. It is equally important to honor commitments, notably and especially regarding the Specialist Chambers.”

Kosovo Foreign Minister Behgjet Pacolli said that he was against the concept of “frontrunners,” as the EU refers to candidate members Serbia and Montenegro, but that it is “good news” that the EU is overcoming its “so-called enlargement fatigue.”

“The EU Enlargement Strategy opens a historic window of opportunity for Kosovo to connect in a definitive manner and without a doubt to the common future in the EU,” Pacolli told BIRN.