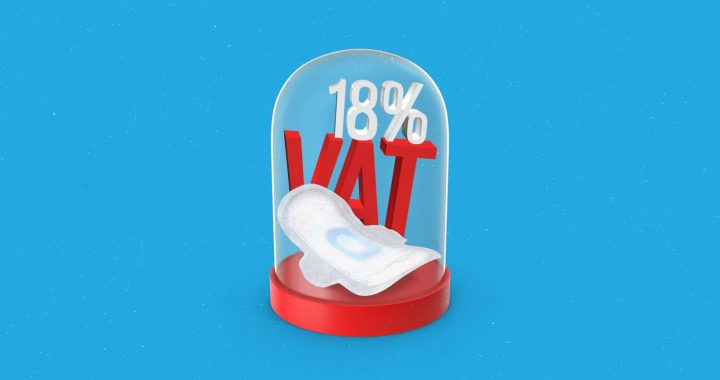 In a country where women are often unemployed or poorly paid, VAT on period products represents a significant financial burden.

If one woman spends five euros every month on period products and a little more on painkillers, a mother of two daughters faces spending around 20 euros on herself and her children for what is a basic biological need. And if that woman is in Kosovo, there’s a good chance she will have to ask her husband for the money, as the only employed person in the family.

In a country where, according to 2020 figures, only 14 per cent of women are in official employment and the minimum wage for over-35s is 170 euros per month, 20 euros is a significant sum.

Hence a call by women’s rights activists for the government to tax period products the same way it taxes essential goods such as bread – at eight per cent, rather than the current 18 per cent – or scrap the tax altogether.

They say the 18 percent value added tax, VAT, levied on menstrual pads, tampons, cups or underwear is an extra, discriminatory burden on financially-vulnerable women – leading to a phenomenon known as ‘period poverty’. But their calls have so far fallen on deaf ears.

“Considering the low level of employment of women in the formal economy in Kosovo, many women have to ‘beg’ their husbands or fathers – i.e. the traditional head of the household – for money to buy something that is essential,” said Ernera Dushica, a project assistant at the Kosovo Women’s Network, an NGO.

VAT on period products, she said, “is a discriminatory tax because it only affects women.”

The so-called ‘tampon tax’ in Kosovo is on a par with most of its Balkan peers, even those like Croatia which are in the EU and could, under EU law, reduce the rate to five per cent. Croatia applies a 25 per cent rate; Slovenia last year cut its rate from 22 per cent to 9.5.

The tax is a particularly harsh burden in Kosovo, where women face higher unemployment rates and greater financial dependency than men.

EcoKos Women, an NGO, has calculated that the average family in Kosovo spends 10.3 euros per month on period products. That might not be much in Western Europe, but in Kosovo a large proportion of women are not in full-time employment.

The minimum salary in Kosovo for people under the age of 35 is just 130 euros, rising to 170 euros for anyone older. In the private sector, according to the state statistics agency, the average salary after tax in 2021 was 376 euros. Women in Kosovo work mainly in wholesale and retail trade, the healthcare industry, and education. As of 2021, the average wage in wholesale and retail was 324 euros after tax, 559 euros in healthcare and 461 in education.

With an official employment rate for women of just 14 per cent, the World Bank has expressed concern that some of those not officially employed are working in Kosovo’s considerable grey economy for even worse pay than official rates. The informal economy accounts for around 35 per cent of economic activity, according to World Bank estimates.

Kosovo’s legal framework obliges all public institutions to apply gender responsive budgeting when introducing and implementing policies by ensuring equal distribution of resources based on the specific needs of men and women of different societal groups.

According to the Law on Gender Equality, gender budgeting is “a necessary tool to guarantee that the principle of gender equality is respected in collecting, distribution and allocation of resources.”

In practice, however, it is rarely respected; the Law on VAT, for example, does not apply gender responsive budgeting or market research.

The finance ministry has been largely unresponsive to calls from the likes of the Kosovo Women’s Network to scrap VAT on period products. Nor did it respond to a request for comment on this story.

“A gender analysis suggests this would assist the families with low income and contribute to the advancement of equality in the collection of state revenues,” Dushica said, arguing that the loss in revenue from scrapping the tax could be recouped in other areas.

“The government could introduce a green tax, an increase in tax on actual luxury products, such a very expensive car, or higher excise on alcohol or other substances that might damage citizens’ health and are not essential goods such as menstrual hygiene products,” she told BIRN.

Dushica said that the ministry feared that scrapping or reducing the tax on period products would lead to calls for the same for diapers, a move she said would also be justified.

“They should remove or reduce the VAT for diapers as it would also be very helpful because the same difficulties apply, and the monthly expenses are even higher for baby diapers.”