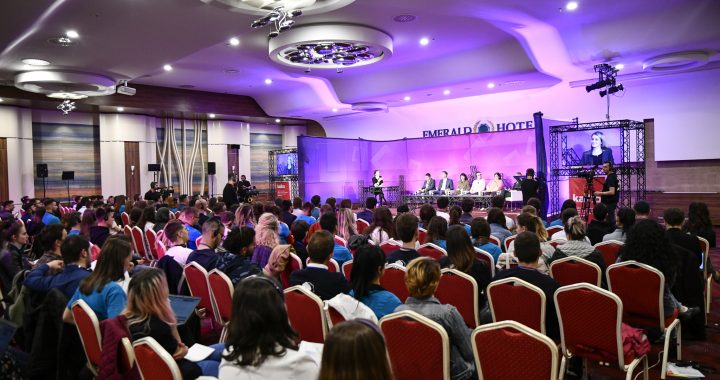 Kosovo youth debate their future in the labor market

The gap between the needs of the economy and the skills of Kosovo’s youth is getting bigger, and the government needs to step up, said participants in BIRN’s televised #debatpernime, ‘debate for real,’ airing on RTK at 20:15 this Thursday.

The most recent discussion in the #debatpernime, ‘debate for real,’ series organized by BIRN Kosovo was held in Prishtina last Thursday, bringing together Kosovo’s youth, government ministers and civil society organizations to discuss the role of young people in the country’s economic development.

Panelists in the debate highlighted the need to boost employment and support the development of vocational skills in Kosovo youth, emphasizing that closing gaps in the labor market requires integrated decision making across Kosovo’s government ministries.

According to experts on the panel, 55 per cent of Kosovo youth are overqualified for the job they have, and vast educational reform is needed to avoid the migration of skilled young people.

“Surface level improvements are not enough. We need to reform the entire system, starting with the new curriculum,” said Trina Binaku from the NGO Youth Initiative for Human Rights. “We can’t solve this problem with youth only from one perspective. We need to connect all the mechanisms at our disposal, and work together. Implementing these decisions is the real work, and only then will we see change.”

More than 200 young people in Kosovo attended the debate, posing questions to the panel about the government’s role in improving access to employment and the quality of secondary and higher education in the country.

Minister of economic development, Valdrin Lluka, attended the debate, as well as Shyqiri Bytyqi, the Minister of Education, Science and Technology. They discussed their ministries’ role ensuring that Kosovo’s educational curriculum is shaped to be in line with the needs of the country’s labor market.

“Yesterday, I was at a fair discussing with manufacturers and business owners, it’s incredible to hear the amount of difficulty they have finding qualified staff,” said Lluka. “All of us together need to identify what the skills Kosovo needs in the coming years are.”

The panelists in particular highlighted the problem of minority youth gaining access to employment.

“In Kosovo we have a lack of private sector development and the wages are higher in public sector, so it’s difficult to find youngsters who will work for 150 euros a month in the private sector, which isn’t enough to cover their basic expenses,” said  Vladimir Zivkovic, a youth employment officer from NGO HELVETAS Swiss Intercooperation. “These are common problems for all youth in Kosovo, but for youth from non-majority communities, this issue is even greater.”

In Kosovo, among the 350,000 people in the country that are currently employed, more than 90,000 work in state’s public institutions.

Zivkovic said that employment vacancy announcements are often not tailored for minorities, and fail to make concessions in terms of language requirements and transport. “The system should work the same for everyone.”

Zivkovic further said that the private sector needs to be the focus of the government’s policies.

“The government should focus on the real situation, take a look at the legislation, respect the laws they created,” he said. “The government isn’t just somewhere you can get a job, but it should be seen as an instrument through which the people can develop themselves.”

Shpresa Agushi from NGO RROGRAEK works with the Roma, Ashkali and Egyptian communities. She emphasized that membership in these communities, coupled with the discrimination they face, can make employment almost impossible.

“When Roma, Ashkali and Egyptian individuals apply for a job, institutions should not tell them ‘this is not a job for you,’” she said. “This has happened. So many people have been discriminated against, were told to ‘look for a job fit for your community,’ and were prevented the right to apply for a job in line with their qualifications.”

Agushi said that action plans of the Kosovo Government designed to integrate these communities are not coming up with the results they need.

“We do have a lot of youth getting the education they need, but then not getting the jobs because of the lack of proper implementation of the law,” she continued. “People need to be given that right so that once and for all we can eliminate these issues.”

According to Minister Lluka, the energy sector is one solution for the Kosovo government to eliminate youth unemployment.

“The energy sector generates around three billion euros, and there isn’t another sector that will generate more job opportunities,” said Lluka. “All the needs for electronic engineers will be met, we will have people receiving the right education. We met with the Minister of Education to discuss introducing a Bachelor and Master degree in energy studies.”

Lluka’s response generated backlash from the crowd, who drew attention to the recent shutdown of the faculty dealing with energy studies at the University of Prishtina because of a lack of professors to teach the subject.

One participant from Vushtrri, Dafina Krasniqi, criticized Lluka for focusing on developing coal-fired power plants as Kosovo’s main energy source, saying that this is the complete opposite of what youth in Kosovo want from the energy sector.

Minister Lluka, I don’t know if you can see it, but the entire world is combating environmental pollution and people are moving towards alternative energy. A lot of Kosovo youth undertake activities to protect the environment,” she said. “Minister, why do you have the right to decide to build a power plant when we are doing so much to avoid this? You want to blow dust in the eyes of me and my generation.”

Lluka replied “It’s easy to say we only want green energy, but we need to strike a balance.”

“We are planning to shut down the 800 megawatt power plant, Kosovo A, and are opening the 400 megawatt Kosova e Re only for energy stability,” he continued. “We are not talking about old technology here, it’s modern, and we need to meet the needs of businesses and manufacturers.”

According to Bytyqi, the Ministry of Education is developing its career guidance model to ensure that young people can access information related to the labor market in Kosovo.

“With the Ministry of Social Welfare and the Ministry of Trade and Industry, we have a memorandum of understanding to identify the problems and we are still working on it. In our vocational schools for example, all the students coming out of these schools find jobs,” said Bytyqi. “With a focus on youth, we’ve built career centers and wherever we’ve placed career centers students go to get guidance.”

Taulant Nikci, a law student at the University of Peja, complained that although his university claims it has the career guidance that university students need, it is inaccessible.

“The career counselling subject has no content,” he said. “The counselling course is included online, but in the curriculum it only has the date when the course will start, there is no content to be found.”

In response, Minister Bytyqi admitted there were flaws in the system.

“We are working on this, it requires continuous information and can be subject to change every year,” Bytyqi replied. “Career

need to be trained and updated. Career guidance at a university level is over with now, because people have already decided what career they will have.”

Some in Kosovo have taken education into their own hands. A lack of proper sexual education led panelist Eurisa Rukovci to create SHNET, the online application providing education and awareness on all things related to sexual health. According to Rukovci, not enough care is being given to these sensitive elements of youth education.

“It’s a multi-dimensional problem, and the curriculum is a big factor here,” she sid. “It’s subject to constant change, and that means teachers don’t know how to teach it properly, and a lot of them just don’t want to.”

One of the most fundamental elements of education reform, according to the panelists, is for communities in Kosovo to speak both Serbian and Albanian.

“There is social isolation between communities in Kosovo, they don’t know one another’s language, and when members of these communities meet they have to speak English,” said Binaku. “There are free courses from NGOs, but no initiative from the government. Serbian is an official language, so it should be included in the curriculum.”