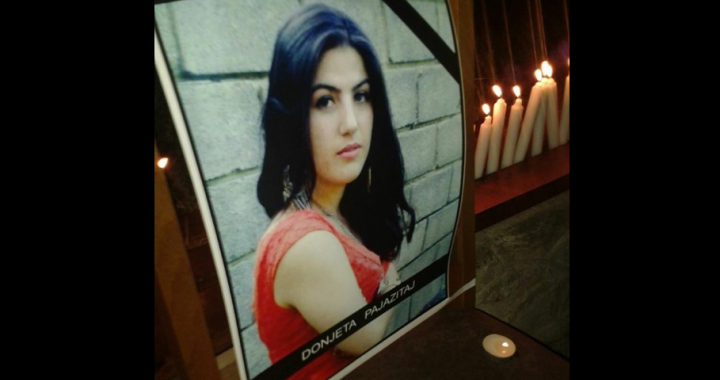 Naser Pajazitaj has been handed a life sentence for the aggravated murder of his cousin Donjeta, the third verdict in this case by a Kosovo basic court.

The Basic Court of Ferizaj has sentenced Naser Pajazitaj to life imprisonment for the aggravated murder of his cousin Donjeta Pajazitaj, who was 24 when she died in 2015.

According to the indictment filed by the prosecution, on November 11, 2015, Donjeta Pajazitaj was on her way to work when Naser Pajazitaj picked her up in a car, before driving to a place known as Kroni i Lajthise in the mountains west of the village of Strellc near Decan, and shooting her twice in the head.

The indictment also accuses Naser Pajazitaj of concealing evidence of his crime by covering the body. Donjeta was found dead by passersby on December 27, 2015, six weeks after her family reported her missing. The prosecution sought the maximum sentence in the case.

In the final session of the trial, prosecutor Valbona Dishaj-Haxhosaj stated that the accused committed the criminal offense of aggravated murder in a cruel or deceitful way, adding that she remained close to the indictment on all counts.

Following the announcement of the verdict on Thursday, Ahmet Tahiri, a defense lawyer for Pajazitaj, described the decision as scandalous. “We will file a complaint and use every extraordinary legal route in order to clarify the truth in this case,” he said outside the courtroom.

Thursday’s decision by the Basic Court of Ferizaj is the third verdict on the case by a basic court in Kosovo. In March 2018, Naser Pajazitaj was sentenced to two years and four months imprisonment for an unlicensed gun charge, but acquitted for murder at the Basic Court of Peja, with the presiding judge citing insufficient evidence presented by the prosecution.

A year later, in March 2019, following a successful appeal for a retrial by the prosecution, the Peja court sentenced Pajazitaj to life imprisonment for the murder. The decision was then upheld by the Court of Appeals in July 2019.

However, in September 2019, the Supreme Court overturned both decisions by the Basic Court of Peja and remanded the case for retrial. At the decision of the Court of Appeals, the second retrial was held at the Basic Court of Ferizaj, in order to remove any suspicion against the justice system.

Tahiri claimed that Thursday’s decision did not address any of the issues raised by the supreme court.

Over the years, the case has been the subject of a number of public protests. In December 2015, residents of Decan participated in a peaceful march to express their anger over two murders, including that of Pajazitaj, while in September 2018 Kosovo Women’s Network organised a protest outside the first appeal trial.