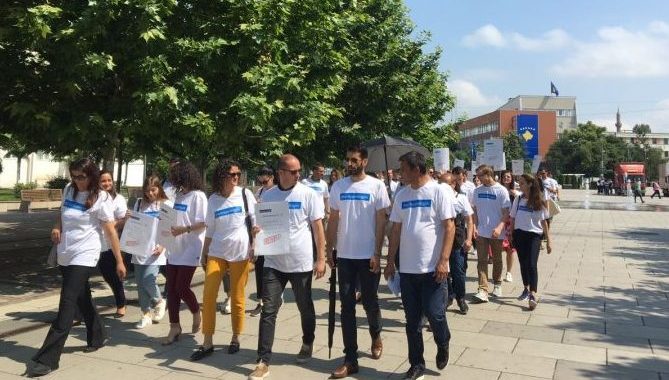 A ‘March of Refusal’ aiming to garner support for the rejection of a draft law regulating the finances of political entities ended in the forcible removal of protesters from PDK headquarters on Monday.

Over 100 civil society organizations joined a ‘March of Refusal’ on Monday to oppose the adoption of amendments to the Draft Law on the Financing of Political Entities, ending in the forcible removal of protesters from the headquarters of ruling Democratic Party of Kosovo, PDK.

Protesters visited the headquarters of the six main parliamentary political parties in the city during the march, aiming to drum up support to reject the adoption of the draft law.

According to the Kosovo Democratic Institute, the organizer of the protest, the draft law is “contrary to the constitutional spirit and violates international standards for financing of political parties, in particular the recommendations of the Venice Commission.”

On the banners, civil society representatives gave messages to the members of parliament to reject this bill, which “spends citizens’ taxes without accountability, makes political bargaining with public money, conceals names of party donors, descent of financial means and reduce fines.”

“Civil society representatives were violently removed by employees of the Democratic Party of Kosovo in front of the party’s headquarters in Prishtina, despite the fact that all relevant institutions, including PDK, were informed of this march,” said KDI on Monday.

KDI called for action to be taken in response to the removal of the protesters.

“Civil society condemns violence against members of non-governmental organizations and calls on PDK, as the largest entity in the current ruling coalition, to assume the burden of responsibility and their actions contribute to building state, respecting the standards of democratic societies and the basic right to citizen unity, free expression and peaceful protests.”

The Venice Commission, a legislative advisory body of the Council of Europe, expressed serious concerns about the independent audits submitted by political parties in June 2018 that were reviewed by their monitors.

“The political parties had significant amounts of unverifiable income and expenditures, persistent violation of financial accounting, internal control and reporting standards and showed instances of being in violation of the tax laws and the Law on the Prevention of Money Laundering,” the commission said in their recommendations.

In particular, the commission found it “disturbing” that major opposition parties were neither involved in the preparation of the draft law, nor had been given the chance to see it, and recommended that the government strengthen interest and awareness around party financing regulations among political officials.

When the law was initially approved by the Kosovo Government in October, a press release from the Office of the Prime Minister explicitly stated that the amendments made had “taken into account the opinions of the Venice Commission that are incorporated into the law.”

“By supplementing and amending the law, it is foreseen to clarify some of the legal provisions, with particular emphasis on the control of financing political parties, audit of financial reports and their publication,” reads the press release from the prime minister’s office.

“The draft law defines the punitive measures for entities that do not comply with the requirements of this law,” the press release continues. “The initiative to amend the Law on Financing Political Parties was made in order to increase transparency and the fight against corruption.”

The Venice Commission further noted in June that numerous allegations of “covert funding schemes” within political parties had been made since 2014, recommending that regulatory agencies should be given an explicit mandate to conduct investigations when potential irregularities arise, which does not currently exist.

“Civil society organisations have consistently claimed that political parties receive donations and carry expenditures in cash, and the cash is not registered or tracked in the parties’ financial reports,” said the recommendations of the Venice Commission. “[They also claimed] citizens made contributions to political parties which exceeded their annual income but no agency checked their origin.”

Opposition expressed support for the march

Vetevendosje, an opposition party in the Kosovo Assembly, welcomed the protest by civil society representatives, and expressed support for the rejection of the draft law.

“[Vetevendosje] supports the right demands of civil society and we demand that any change within the draft laws for political entities requires more transparency, increased democracy and accountability towards citizens and responsible institutions,” said Vetevendosje representatives in a press release.

They also condemned the “physical assault and threats” at the PDK headquarters against civil society representatives, demanding that legal action be taken in response.