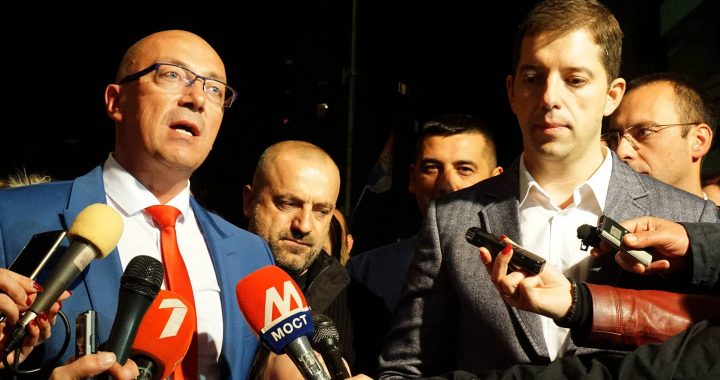 Can a government be formed without Lista Srpska?

After winning the largest share of the vote in the parliamentary elections, Vetevendosje have promised to exclude Belgrade-backed Lista Srpska from the next Kosovo government. But is it democratically and constitutionally possible?

Results from the October 6 parliamentary elections are yet to be officially certified by Kosovo’s Central Election Commission, CEC, but negotiations to form the country’s next coalition government are already well underway. The two most voted for parties, Vetevendosje and the Democratic League of Kosovo, LDK, are deep in discussions, with Vetevendosje leader Albin Kurti promising that the government will be formed in November.

However, while talks between Vetevendosje and LDK may be going well, finding partners from Kosovo’s ethnic minority parties, particularly Kosovo Serbs, constitutionally required to fill a small number of ministerial positions, may prove to be more problematic.

In the past two governments, these positions have been held by members of Lista Srpska, the Belgrade-backed Kosovo Serb political party that have dominated elections in areas with majority Serb populations since it began competing in Kosovar elections in 2013.

Vetevendosje however, are resistant to working with Lista Srpska, and, according to member of the Vetevendosje chairmanship, Fitore Pacolli, have so far excluded the party from discussions.

“We have already started our dialogue with LDK, Serb and other minority political parties to discuss our new government,” Pacolli told Prishtina Insight. “We will not include Serbian list within our governing coalition because they are not a political party that represent local Serbs in Kosovo, but represent a state – the Serbian state.”

In place of Lista Srpska, Vetevendosje appear to be seeking other representatives from the Kosovo Serb political spectrum. Kurti has been photographed meeting with Nenad Rasic of the Sloboda coalition, while Slobodan Petrovic of the Independent Liberal Party, who advocate the recognition of Kosovo by Serbia, has stated that he is open to any kind of cooperation with the next government.

However, while figures such as Rasic and Petrovic have expressed willingness to cooperate, their performance at the ballot box on October 6 left them far behind their Belgrade-backed rivals. Preliminary results put Lista Srpska on more than 95 per cent of the vote amongst Kosovo Serb parties, a significant increase on the previous parliamentary elections in 2017, and a result which would guarantee the party all 10 seats reserved in parliament for Kosovo Serbs.

Advocates of Lista Srpska argue that the results should guarantee the party as the representatives of the Kosovo Serb community in the new government, and to seek alternative options would constitute a violation of democracy.

Igor Simic, an MP for Lista Srpska in the previous mandate, told Radio Free Europe that it is “cynical” for someone who received 26 per cent of the vote from the Kosovo Albanian community to question his party, adding that their place as representatives had been entrusted to them by a vote.

Representatives in Belgrade have also issued statements decrying a potential “manipulation” of Kosovo Serb votes, claiming that reports of a potential poisoning at the CEC were an attempt to distract from a poor performance in the election by parties opposing Lista Srpska. In the statement, Marko Djuric, the head of Serbia’s so-called Office for Kosovo and Metohija, described political figures from outside of Lista Srpska as “Kurti candidates.”

It is not just advocates of Lista Srpska that have been questioning the decision. Lazar Rakic from Zubin Potok works in the Mediation Center in Mitrovica and describes himself as “the opposite” of a supporter of Lista Srpska, but still queries the possibility of forming a government without the party.

“Albin Kurti’s discourse that he will communicate with ‘local Serbs and not with Serbian List’ is nonsense,” Rakic told Prishtina Insight. “Who are the ‘local Serbs?’ We live in a representative democracy. Community representatives are elected in the elections, whether we like them or not.”

But back in Prishtina, Vetevendosje are far from alone in seeing Lista Srpska as a party that does not genuinely represent the interests of the local Serb community, but of Belgrade, and more specifically of Serbia’s President Aleksandar Vucic and his governing Serbian Progressive Party, SNS.

Vigan Qorrolli is a lecturer at the Faculty of Law at the University of Prishtina. He describes Lista Srpska as “a political creature emerging from the senseless, so-called technical negotiations in Brussels between Prishtina and Belgrade,” adding that the party were created in order to represent Belgrade, and specifically Vucic within Kosovar institutions.

The lecturer argues that Kosovar Serb politicians willing to engage with the Kosovo state, including Petrovic and Rasic, “have consistently been intimidated and blackmailed by Belgrade, being labelled as ‘Albanian collaborators’.”

In the buildup to the elections, Rada Trajkovic, a colleague of Rasic in the Sloboda coalition described herself as “an enemy of the state” for refusing to cooperate with “the deep state” in Serbia. Asked why she was running against Lista Srpska, Trajkovic told Kossev: “I wanted to show that Lista Srpska is not competent to receive the support of the Serb people in Kosovo and Metohija.”

Trajkovic also cited the murder of Kosovo Serb politician Oliver Ivanovic and the presence of suspect in the case Milan Radoicic in Lista Srpska’s power structures as key motivations. “Lista Srpska’s victory would mean that the Serb sacrifice evident in Kosovo and Metohija for the past 20 years has been compromised, because that would mean that the mafia is now Serbia’s essential state project in Kosovo,” she told Kossev.

While political entities opposing Lista Srpska performed poorly at the parliamentary election, both Pacolli and Qorrolli point to comments made by the EU’s observer team, which described the process as marred by an “uneven playing field’” and intimidation in Serb-majority areas.

For Pacolli, these reported irregularities justify Lista Srpska’s exclusion from the government. “It is the Serbian List that violated the democratic electoral process in Kosovo,” she argues. “According to the team of 108 EU observers, who monitored the election countrywide, the electoral process in Kosovo was well-administered and transparent but the process for the Serbs in the country fell short of international standards due to intimidation of other ethnic Serb political parties. This was done by [Lista Srpska].”

Lazar Rakic concedes that “the result of [Lista Srpska], with a turnout of about 50 per cent, is a product of pressure and fear.” He depicts the pressure as being multi-layered, first to vote in Kosovo elections, which Rakic describes as not the natural disposition of many Kosovo Serbs, and second to vote for Lista Srpska.

However, the resident of Zubin Potok also argues that the fear that motivates Kosovo Serbs to vote for Lista Srpska is not exclusively produced in Serbia, and that Kosovo Albanian politicians have helped stoke support for the party. “There will be no independent Serbian party for as long as the fear of the majority exists,” he says. “The behavior and narratives of the Kosovo Albanian political elite is cornering the Serbian community to seek outside support, which therefore strengthens Belgrade’s position.”

Regardless of the ethics and democratic nature of seeking other Kosovo Serb representatives for the next coalition government, there may be a bigger obstacle to doing so: the Constitution of Kosovo.

Article 96 of the constitution states that there must be one minister and two deputy ministers from the Kosovo Serb community, with provisions for further ministers and deputy ministers in the event of there being more than 12 ministries.

The most crucial element of the Article is point five, which states that if the ministers and deputy ministers are appointed from outside of members of the Kosovo Assembly, then they require the formal endorsement of the members of the Assembly representing that community. Essentially, any Serb minister or deputy minister must be endorsed by the MPs representing Kosovo Serbs, which may well be 10 members of Lista Srpska.

It is this potential violation of the constitution that has particularly aggravated Kosovo Serbs. Speaking to Radio Free Europe, Lista Srpska’s Igor Simic labelled the intention of replacing representatives of his party with “more acceptable Serbs” as being in violation of the constitution, adding that any government formed would be unconstitutional and “show the true face of political leaders who have their mouths full of the rule of law.”

Rakic meanwhile, stated that while he would be happy to see representatives from outside of Lista Srpska appointed through the existing legal framework, disobeying legal provisions would leave him feeling threatened. “This would establish a dangerous precedent for the future,” he said.

Pacolli refused to comment on questions over whether excluding Lista Srpska from the government was constitutionally possible. However, she felt that doing so would not have consequences for Kosovo internationally.

“There wouldn’t be any consequences since we will not excommunicate them,” she told Prishtina Insight. “They have won the seats and they will remain in their parliamentary seats, and I hope they will contribute to the democratic state building and socio-economic development Kosovo needs.”

Prishtina Insight contacted LDK to enquire about their position on the exclusion of Lista Srpska but received no response. However, Driton Selmanaj, an LDK MP in the previous mandate urged for talks with the party in a televised debate on KTV on Tuesday night, citing the constitution.