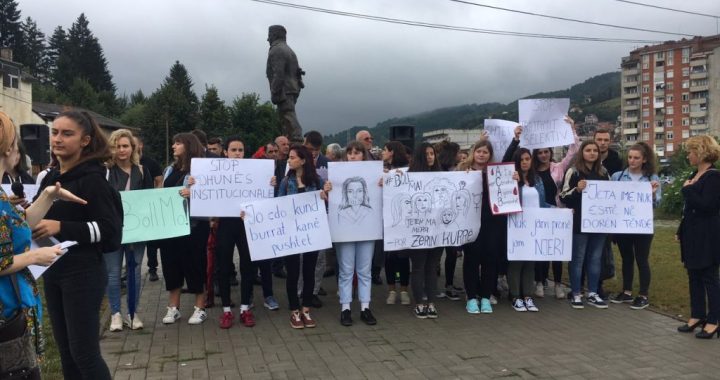 Following the murder of a woman and her daughter in Gjakova last month, the Police Inspectorate of Kosovo is investigating three policemen for negligence in the course of their official duties.

In a press release issued on Wednesday, the Police Inspectorate of Kosovo, IPK, proposed the suspension of three policemen employed at the Police Station in Gjakova as part of an investigation into their alleged negligence regarding the murder of a woman and her nine year old daughter in Brekoc on August 7.

According to the press release, the IPK had started preliminary investigations at the Regional Directorate of the Kosovo Police in Gjakova the day after the event, and recommended that the policemen are suspended until the probe into suspicions of “abuse of official duty or authority” is concluded.

“In consultation with the Basic Prosecution of Gjakova, the IPK will continue investigation and analyses of every action and inaction of police officials from the Regional Police Directorate of Gjakova until the event is fully solved,” the press release reads.

The main suspect of the murders, Pjeter Nrecaj, the victim’s husband, will remain in custody until November 5, 2018 following a request made on Wednesday by prosecutor Agron Matjani, who said that investigations are still ongoing.

“The defendant may destroy evidence, impede the flow of the investigations and influence the witnesses of of the case,” Matjani said, citing reasons for the extension of his house arrest by two more months.

Following the murder, the police reported that the the victim, Valbona Nrecaj, had sought help from the local police five hours before the murder occurred, claiming her former husband was sending threatening messages.

The Police justified its actions by saying that officers were unable to find the suspect or reach him via telephone prior to the event. Lieutenant Colonel Ahmet Hasi, director of Gjakova police, had said that the search continued until they received information about firearm shots in Brekoc.

Ndrecaj had issued complaints about her husband before, at which point the police offered her shelter. According to victim protection officer Agim Pula, Ndrecaj said she and her five children would stay with her brothers. Victim protection officers were not called to deal with the threats prior to the murder.

The murder of Valbona Nrecaj and her daughter spurred widespread protests against gender-based violence and institutional negligence in multiple cities around Kosovo, including Prishtina, Gjakova, and most recently in Kacanik on August 27.

Correction September 6, 2018: A previous version of this article incorrectly said that Pjeter Nrecaj is under house arrest. He is in custody.