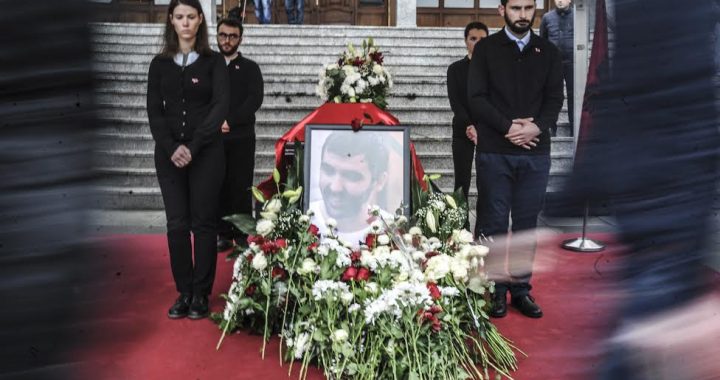 Astrit Dehari's funeral was held on Tuesday, after a commemorative meeting and march. | Photo: Atdhe Mulla

Kosovo’s Prosecution Office will continue investigations into the death of Astrit Dehari, after expertise provided by a Swisss forensic institute stated the need to clarify the circumstances around the death of the Vetevendosje activist, who died in a Prizren jail in 2016.

A report from the University Center of Legal Medicine in Lausanne concludes that the circumstances surrounding the death of Astrit Dehari require further investigation. Although the complete report has not yet been made public, extracts have appeared in the Kosovo media.

“We assess that a new investigation is needed to clarify the circumstances of the death of Mr. Dehari, Astrit,” the report reads. “Our teams and laboratories will be in the disposition of the investigators that deal with the case.”

The report also seems to contradict earlier assertions that Dehari committed suicide. “In fact, the forensic hypothesis that Mr. Dehari, Astrit, committed suicide with certain tools has little truth and the intervention of a third party in the fatal process should be taken into account,” it states.

In response, the Basic Court of Prizren issued a statement on Thursday morning, revealing that case will continue to be investigated.

“Based on the findings of the report, the prosecution will continue its investigation of this case and will take all the necessary actions,” the statement reads. “It will hear from experts from the forensics institute in Lausanne, as well as experts from the Kosovo Forensic Agency, to explain their reports. If it is necessary, extra expertise will also be sought from abroad in cooperation and coordination with international partners, in order to clarify the circumstances and causes of death.”

In the statement, the Basic Court also tried to assure the public and the Dehari family that a professional investigation will be conducted.

The release of the statement followed a press conference from the wife and parents of Dehari, who have received a translated copy of the report. The family stated that the report shows that Astrit was killed and did not commit suicide. Dehari’s mother Xhemile told reporters that she felt very calm, as the family always knew that her son had been killed in jail.

The family’s attorney, Tome Gashi, said the report places responsibilities on the Kosovo justice system. “The Prosecution has the obligation to verify this [report] and to find those guilty of murdering of Astrit Dehari,” he told the press conference.

The Swiss expertise was demanded by the Dehari family and approved by the Ministry of Justice to investigate the unclear circumstances surrounding the death of Astrit Dehari at the Prizren detention center on November 5, 2016.

Dehari was one of six Vetevendosje activists suspected to have attacked the Kosovo Assembly building on August 4, 2016. He was detained for 68 days on suspicion of terrorism but was never interviewed by the state prosecution. Vetevendosje have claimed that no forensic evidence ever tied Dehari to the crime.

Initial police statements claimed that Dehari’s death occurred on the way to the hospital due to medication the deceased had ingested but later autopsy reports declared that the cause of death was self-inflicted asphyxiation.The unclear circumstances saw a series of public protests demanding an independent investigation.

In December 2016, Gashi and the family published a report citing independent experts’ opinion that there were signs of self defence and claimed that Dehari was murdered. Four days later on December 20, an extraordinary session was held at the Kosovo Assembly that committed the government to an external investigation financed by the state. In February 2017, the family engaged the Swiss forensic team.