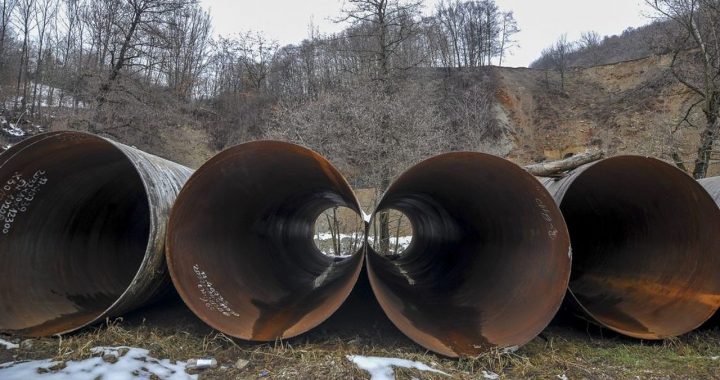 Pipes for the construction of hydropower plants in Shterpce/Strpce in 2019. Photo from the archives: BIRN/Atdhe Mulla

Kosovo environmentalists hail major victory as Supreme Court suspends the water permit of a hydropower plant in Shterpce/Sterpce after a lawsuit filed by local NGOs.

Kosovo’s Supreme Court on Monday suspended the water permit of the Brezovica hydro-power plant in Shterpce/Strpce, making it impossible for the construction company to apply for a necessary environmental permit.

Two non-governmental organizations, Group for Legal and Political Studies, GLPS, and GAIA Kosovo, which had requested annulment of the water permits for the Brezovica hydro-power plant in court in February, on Monday welcomed the Supreme Court ruling, overturning an ealier decision of the Kosovo Court of Appeals.

The Court of Appeals previously decided not to suspend the work on the hydro-power plant, claiming suspension of work would be against the public interest.

However, the Supreme Court decided that the plaintiffs had provided enough evidence that the public would be damaged by the power plant and that suspension of permits is not against the public interest, neither does it cause substantial losses to the constructing company.

Arber Fetahu, from GLPS, on Monday said the Supreme Court ruling was a “very big win for the citizens of Shterpce because it means that with the suspension of the water permits for the Brezovica hydro power plant, the constructing company cannot apply for environmental permits, the issue of which is a precondition for the operation of the hydropower plant”.

According to Fetahu, GAIA and GLPS only sued against the water permit of the Brezovica plant because it is the only one given “so far by the Ministry of Environment – even though for almost one year we have requested water permits for other hydro power plants in Shterpce, meaning the plants at Sharri, Shterpca, and Vica”.

Fetahu said the human rights of the Shterpce/Strpce citizens were violated due to them not having been informed about a “public debate” that was held on the hydro-power plants.

“The whole procedure since the start has been non-transparent, which was written even in the Ministry’s [of Environment] report itself,” Fetahu told the media.

Alongside the damage made to the ecosystem by the hydro power plants, BIRN reported one of the main concerns in Shterpce/Strpce – the water scarcity that construction caused.

Mevlude Skuroshi, from GAIA Kosovo, reminded the Minister of Environment, Liburn Aliu, that “in his official visit, in the spring of this year, he had offered support to the locals in Shterpce, in the location where Brezovica hydro power plant is constructed, but also further down in the Biti/Bitinje village”.

However, according to Skuroshi, despite the minister’s visit “eight months ago” and a feasibility study from a working group from “five months ago… there has been no concrete step from the ministry”.

Since 2015, when the construction of hydropower plants in Lepenc river started, residents of Shterpce/Strpce have joined several protests.