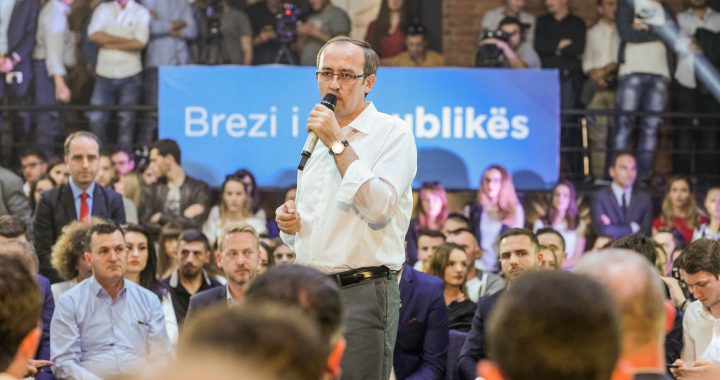 Acting Prime Minister Avdullah Hoti has been named as the prime ministerial candidate for the Democratic League of Kosovo, LDK, in Kosovo’s upcoming parliamentary elections. It is the second time Hoti is standing as a prime ministerial candidate, having been LDK’s nomination in the 2017 parliamentary elections, when the party finished in third place.

In a press conference held after a meeting of the LDK presidency on Wednesday, party leader Isa Mustafa said that no other candidate was considered.

“All of the LDK presidency supported Mr Hoti to be our candidate for Prime Minister without any objection,” Mustafa said. “We have not assessed that we need to make changes, and we have the full confidence to go with the same candidate.” He added that LDK will not be seeking to form a pre-election coalition with any other party.

Hoti thanked his party for trusting him and said that his government has done an “extraordinary job” in the past seven months.

“I believe that in these seven months we have provided strong evidence in terms of the rule of law, the fight against corruption and organised crime, restoring the relationship with our [international] partners that had been damaged, and the extraordinary results in the fight against the pandemic,” the acting prime minister said.

“I am convinced that we are the favourites to win the election based on the results of the work of this government,” Hoti added.

Hoti was elected prime minister by the Kosovo Assembly on June 3, 2020. However, on December 21, the Constitutional Court announced its decision that the election was not in compliance with the constitution due to the decisive vote of MP Etem Arifi, who had previously been convicted of a criminal offence.

The decision will come into effect following the publication of the full text in the Official Gazette and the court’s website, and holds that the President should announce new parliamentary elections within 40 days. Acting President Vjosa Osmani held meetings with the leaders of Kosovo’s parliamentary political parties on December 22 and 23, to discuss the date of the elections.

A poll conducted by UBO Consulting last week saw most respondents indicate that Kurti is their preferred candidate for prime minister, with 44 percent backing the Vetevendosje leader. Hoti placed second in the poll with 12 percent, while Hoxhaj was in joint third place with acting President Vjosa Osmani on 11 percent.