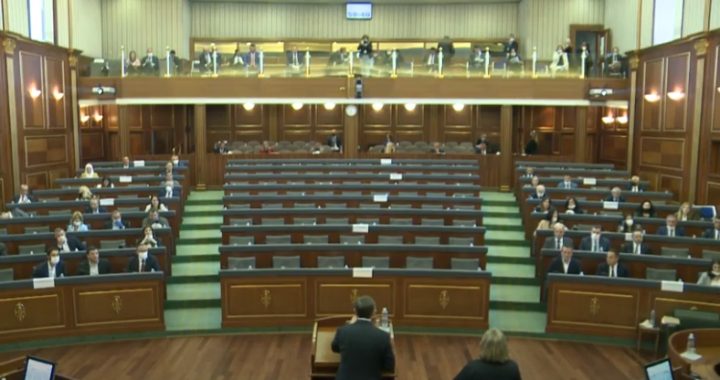 With 61 MPs voting in favour of Avdullah Hoti’s proposed cabinet, Kosovo has elected its sixth government since declaring independence in 2008.

In an extraordinary session of the Kosovo Assembly, a new coalition government led by LDK’s Avdullah Hoti was elected on Wednesday with 61 votes in favour, 24 votes against and one abstention. With a majority of 61 required, the motion electing the government passed by a single vote.

In his address to the Assembly before the vote, Hoti said that his government would protect Kosovo’s territorial integrity and respond to the “shock” that the economy will suffer in the coming months.

“The new government will have a new program of economic recovery,” Hoti said, adding that a fund will be established to cope with the consequences of the COVID-19 pandemic.

In regards to the dialogue with Serbia, Hoti said that the government will take its “constitutional responsibilities” to lead negotiations for Kosovo and would not allow a “change of borders or a land swap.” He added that “Kosovo authorities will respect the Kosovo Constitution in full and the comprehensive deal will be based on mutual recognition.”

The new government will be made up of 16 ministries, with seven ministers nominated by LDK, four by AAK, two by NISMA, two by Lista Srpska and one by the Democratic Party of Kosovo Turks. There will also be four deputy prime ministers, with one provided by each of LDK, AAK, NISMA and Lista Srpska.

Agim Veliu has returned to his post as Minister of Internal Affairs after being fired in March by former Prime Minister Albin Kurti. Anton Quni, Vlora Dumoshi and Besian Mustafa will all continue as Minister of Defense, Minister of Culture and Minister of Agriculture respectively.

Hykmete Bajrami has been transferred from Minister of Education to Minister of Finance, while Lumir Abdixhiku, previously Minister of Infrastructure, declined to be part of the new government, with his ministry being taken over by Arban Abrashi. LDK will also provide the new Minister of Health, with Armend Zemaj taking over from Arben Vitia.

Goran Rakic, the leader of Belgrade-backed Lista Sprska will serve both as a deputy prime minister and Minister for Local Government. Rakic currently serves as mayor of North Mitrovica, and his appointment will likely trigger an extraordinary election for mayor in the municipality. Delibor Jevtic of Lista Srpska will continue to serve as Minister for Communities and Returns.

Skender Recica, who ran the Ministry of Labour and Social Welfare under the PAN coalition government between 2017 and 2019 returns to his post as one of NISMA’s representatives, while NISMA’s Vesel Krasniqi will lead the newly restored Ministry of Trade and Industry.

LDK, AAK, NISMA and Lista Srpska came to a governing agreement in April after President Hashim Thaci indicated his intention to form a new government without fresh elections following a successful vote of no confidence was passed against the previous government led by Vetevendosje’s Albin Kurti on March 25.

Thaci was mentioned in the session by Haxhi Shala, a NISMA MP who said that he was visited by the president and former prime minister Ramush Haradinaj, who convinced him to vote in favour of the new government. Shala had previously told the press that he planned to vote against the formation of the government. In a press conference held on Wednesday afternoon, Thaci did not deny that the meeting with Shala took place.

Vetevendosje has objected to the decision, with Kurti describing the decision as “unfair” and “unacceptable.” A small protest was held outside during the session voting on the formation of the government, with demonstrators calling for elections.

The session was chaired by LDK’s Kujtim Shala, who announced that the Speaker of the Assembly, Vjosa Osmani, authorised the vice-speakers to chair the session. Osmani has publicly objected to the formation of the government, and on Tuesday proposed a Government of National Unity to lead the country for the next six to nine months.

At the session, the head of Vetevendosje’s parliamentary group Rexhep Selimi stated that the new government is not constitutional. “The government that you want to form is illegal and illegitimate,” Selimi said. “Let us hold elections to respect the will of the people and the constitution.”

*This article was updated to include the confirmation of Haxhi Shala’s meeting with President Thaci.