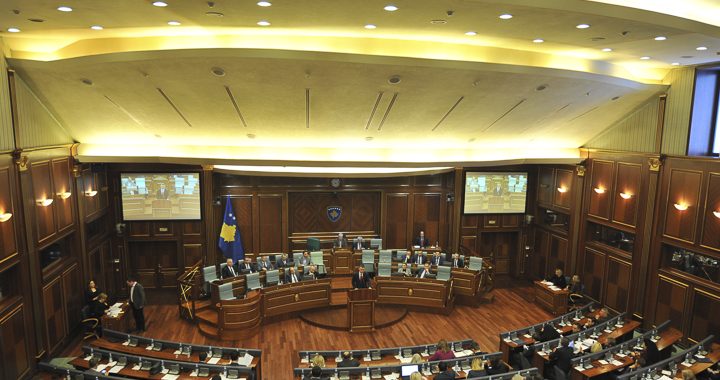 MPs fail to unite against Thaci’s involvement in dialogue

A Democratic League of Kosovo resolution against President Hashim Thaci’s role in the dialogue between Kosovo and Serbia failed to garner enough support at the assembly.

After finally being put to a vote on Thursday, a resolution by the Democratic League of Kosovo, LDK, opposing President of Kosovo Hashim Thaci’s involvement in the EU-mediated dialogue between Kosovo and Serbia did not gather the required 61 votes by assembly members in order to be approved.

First proposed in early September of this year, the resolution was only backed by 50 of the 90 present assembly members, with no votes against or abstentions.

Assembly Speaker Kadri Veseli gave parliamentary groups twenty minutes to come to an agreement regarding the resolution, but they returned one hour later without a unified position.

Head of LDK’s parliamentary group Avdullah Hoti said that they were not able to reach consensus with other groups, but they managed to renegotiate the wording of the resolution point on Thaci’s involvement in the dialogue in accordance with PDK’s proposal for its formulation.

On behalf of his party, Memli Krasniqi from the Democratic Party of Kosovo, PDK, said that they will not vote because the opposition did not take into account the separate resolution that the coalition proposed, which includes five more points.

In early October, assembly members from coalition parties met to draw up  the six-point resolution, aiming to “harmonize all positions and statements” and invited all assembly members to propose any changes they see fit. One of the points also included a proposed roster for the dialogue delegation.

“We met and there was no will for agreement, but we will not drop our request,” he said. “We will not vote because we will not fall for this absolutely unjust trap that the proposer is luring us towards.”

Only Alternativa and the Social Democratic Party, PSD, positively responded to the invitation.

Vetevendosje’s Glauk Konjufca said that the coalition is blindly supporting the president, and that “this is the core of the problem.”

Only members of the opposition voted, all in favor, whereas coalition members refused to participate in the vote at all.

Coalition parties and the opposition have been divided on Thaci’s role in the dialogue between Kosovo and Serbia. Over the past months, Thaci has proposed a “border correction,” for the final agreement with Serbia – a position that has spurred controversy, with critics saying it would divide the countries along ethnic lines and destabilize the region.