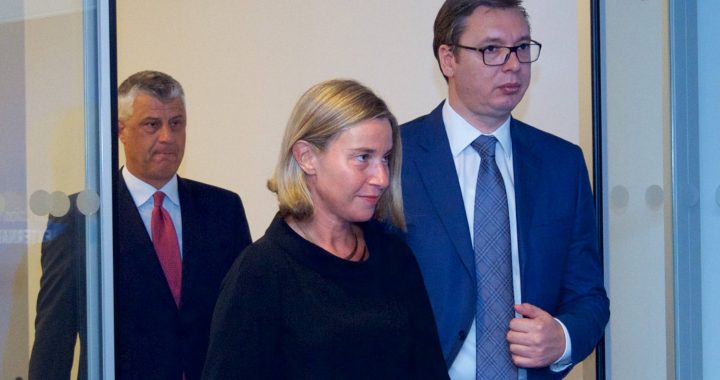 The dialogue: Stuck in strategic limbo

The opening of a new phase in the dialogue was direly needed to avoid its failure. Confusion in Prishtina and Belgrade about the aim of this new phase reflects the temporary absence of a key actor - Germany.

Ever since the July meeting in Brussels of the Kosovo-Serbia dialogue, ‘facilitated’ by European Union High Representative for Foreign and Security Policy Federica Mogherini and her team, at which the opening of a new phase in the political dialogue that started in 2012 was announced, the only palpable result has been confusion.

Beyond the usual spin from both sides, and the reluctance of EU institutions to share information, very little concrete information has appeared in the public arena. Judging by their public statements, Kosovar and Serb state leaders seem to want to focus the new phase on the endpoint of the dialogue; there is talk about a comprehensive, final, bilateral agreement between the two states – even about a historic agreement on Serb-Albanian reconciliation.

Beyond such very general statements, however, no further information is available that would make it possible to judge the direction in which the new phase in the dialogue is moving and how serious an attempt this is to come to a final agreement. At the national level in the Western Balkans, Serbian President Aleksander Vucic opened an “internal dialogue,” while Kosovo President Hashim Thaci announced his intentions to form a “unity team” for further negotiations with Serbia. These recent moves have created even more confusion and demonstrated a lack of ‘national unity’ in both countries on the dialogue.

The dialogue urgently needs to move forward in a new direction; it has fallen into a deep crisis in recent years as evidenced by the following five factors:

First is the extreme delay in implementing the 2013 April Agreement. The deadline for implementation (the end of 2013) was obviously unrealistic but it is now in its fourth year of implementation delay – soon to be fifth. In three of the four years, the dialogue was de facto suspended due to parallel elections in Kosovo and Serbia – with at least one always holding snap elections. This was not a mere coincidence as first thought, but rather the result of a tacit alliance between Prishtina and Belgrade aimed at postponing implementation. When one contrasts the four and a half years it has taken to integrate three formerly Serbian state institutions (municipal, police, and judiciary) into the Republic of Kosovo – a process that is still ongoing – with the approximately 300 remaining Serbian state institutions on Kosovo soil not covered by the April Agreement, it demonstrates the unsustainability of the dialogue process up to now.

Third, is the shift in rhetoric of Serbian officials on the dialogue over the years. In the weeks following the signing of the 2013 Agreement, the leaders of the ruling parties and the state discussed the loss of Kosovo and stated that no political will existed for a military solution to regain the former province. Then, at the beginning of this year, Serbian President Tomislav Nikolic, around the time of the Serbian train incident, talked about sending tanks to Kosovo to retake the province. The public’s insistence on the (alleged) ‘status neutrality’ of the April Agreement – an agreement in which Serb state officials effectively signed off on the integration of the police, the judiciary, and municipal institutions in the four northern Kosovo municipalities into the state of the Republic of Kosovo – has also arisen over time. At the same time, Serbian officials continue to conceal the content of the EU’s core document for Serbia’s accession process – the EU negotiation framework – from the public. A key provision in the document effectively ensures that the territory of Kosovo will be removed from the territorial reach of Serbia’s state institutions through the process of implementing the 35 accession ‘negotiation’ chapters.

The fourth factor is that the EU has not cleaned up the collateral damage the April Agreement has produced in Kosovo. The West has allowed Belgrade to strengthen its control over Kosovo Serb politics in order to secure the political U-turn implied in the April Agreement (partial integration into the Kosovo state) by acquiescing to Belgrade’s formation of the so-called Serb List (Srpska Lista) in Kosovo – a de facto Serb ethnic one-party system. In doing so, it was complicit in destroying the however weak elements of local democracy that had taken root, and giving the party a seat in the Kosovo government.

The fifth and final factor of the crisis of the dialogue is its lack of legitimacy. Through the Dialogue, the EU (and the US) have in effect provided political legitimacy to both Vucic and Thaci and their regimes. By doing that, they traded democracy for the dialogue in both countries. That, and the failure of the dialogue to produce tangible and meaningful benefits for Kosovo citizens up to now, has led the majority to reject it.

Dialogue participants shifted their focus this summer to the endpoint of the process, targeting the main cause of the crisis of the dialogue – the absence of a strategic vision or a master plan. It had enabled domestic actors to use a tactical approach to the dialogue and gave them leverage to postpone implementation. It also forced the EU into frequent tactical compromises that in the long run did more damage than lend short-term relief. When this author asked a representative of the German Chancellery in 2013 if a dialogue masterplan with an endpoint aim exists, the answer was: “If there is one, we won’t tell you.” Three years later, the same Chancellery admitted there was no master plan, and representatives of Mogherini’s team complained that this failing has seriously impeded their work.

Yet the current confusion about this strategic re-orientation of the dialogue – i.e., is it genuine and what will it lead to – is shared by the publics in Kosovo, Serbia, and the West, and is not just the result of the usual Belgrade and Prishtina spin and of the European External Action Service’s, EEAS, closed shop approach. It is the result of a process that still lacks real substance. It seems that the “new phase” of the dialogue resulted from a combined EEAS awareness of the serious crisis of the dialogue and US political pressure. But it remains seriously impeded by the temporary absence of a key actor – Germany. It was Chancellor Merkel’s August 2011-announced EU policy shift on Kosovo-Serbia and her later close relationship with Serbia’s emerging new leader Vucic that enabled the Dialogue. Yet Brussel’s initiation of a new dialogue phase coincided with the campaign for the September German parliamentary elections, followed by complicated, ongoing government formation negotiations; a new German government will not enter office before the beginning of 2018.

Once that happens, Berlin needs to reclaim its lead role in the dialogue, by picking up and supporting the EEAS’s initiative, starting with reaffirming the dialogue’s framework – Merkel’s 2011 statement that the time of border changes in the Balkans is over. Based on this reaffirmation, the EU, with US support, needs to set the stage for Belgrade-Prishtina negotiations over a final, endpoint agreement. They need to set forth all possible options for such an agreement, ranging from an agreement along the lines of the so-called 1972 German-German basic agreement (Grundlagenvertrag) that guaranteed UN membership to both German states without formal-legal mutual recognition, to formal recognition of Kosovo by Serbia. They need to clearly define the aims of such an agreement – full normalization of bilateral relations, including solutions to all open issues (e.g., border, property issues); full integration of Kosovo Serb institutions into the Kosovo state/dissolution of all Serbian state institutions on Kosovo soil; and full international subjectivity of Kosovo and formal-legal guarantees that prevent a future Serbia EU member state from blocking Kosovo’s membership.

Based on this framework, the EU and the US need to return the ball to Belgrade’s court. They need to request that Belgrade present concrete ideas for a final agreement that will meet all these aims without fully recognizing Kosovo if the Serbian government is going to insist on its current position regarding recognition.

Bodo Weber is a Berlin-based Senior Associate of the Democratization Policy Council.