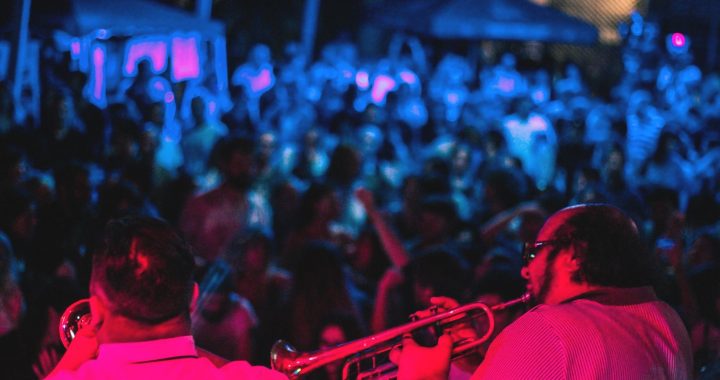 Erdhlezeti 2017. | Photo courtesy of the festival.

Get on your dancing shoes for Erdhlezeti’s ode to summer

Bringing a variety of acts to the heart of Prishtina, the Erdhlezeti festival is set to usher in summertime while harkening back to an age-old, local celebration on May 6.

For the fourth consecutive year, artists from the Balkans and beyond will gather at the ever so familiar corner of town by Dit’ e Nat’, a landmark coffee shop in Prishtina, to celebrate the long-awaited arrival of warm weather and a shared fondness for world music.

Scheduled for May 6, Erdhlezeti coincides – and identifies – with Dita e Shën Gjergjit, the Feast of Saint George, which was traditionally celebrated by all people of the Balkans regardless of ethnicity or religion as an entryway to summer. The name of the festival itself derives from a play on words with Ederlezi, the Romani name for the celebration, creating a double entendre that can also be read as “the fun has come” in Albanian.

Bajram “Kafu” Kinolli, one of the co-organizers and lead singer of Gipsy Groove, said that Ederlezi is a celebration that transcends prejudice, something that is also reflected in the motto of the festival – ‘music is our language’.

“Sometimes, cultural and religious elements can make people unite really well, it is surprising. We, the younger generations, have lost many of our older celebrations,” he said, reminiscing about the rituals of Ederlezi that used to take place when he was a child, full of song and dance. “Dita e Shën Gjergjit belonged to all of us.”

Kinolli’s band, which headlined at the second edition of Erdhlezeti, plays covers of Roma and Balkan classics, as well as original songs influenced by them. This year they will take a step back, leaving the main stage to the leading act of the festival Besh o droM, an upbeat Hungarian collective that combines musical styles from Eastern Europe, the Mediterranean and the Middle East. The band incorporates contemporary instruments alongside the well-known, percussion-heavy style that distinguishes dancy Roma tunes. Their name means ‘follow your path’ in the Lovari dialect of the Roma language.

Besh o droM  will be sharing a stage with Nesesari Kakalulu, an Afrobeat band from Slovenia influenced by Fela Kuti, a Nigerian musician regarded among the most popular in Africa during the second half of the twentieth century. Composed of nine instrumentalists, their music offers endless rhythm.

The local Albanian element will be represented by Gjakova’s Arshiket, a six-piece ensemble that perfectly conveys the amorous longing of traditional urban music from the taverns of northern Albanian cities, especially Shkoder.

The proverbial icing on top of the cake (or trileçe, preferrably) is an unrevealed lineup dubbed Erdhlezeti Allstars. All we know is that they are a collective of various local musicians who will be joining hands just for the festival. Prepare for a jamboree of genuine Kosovo music.

Ylli Vuciterna, communications officer of the festival, said that, in Erdhlezeti’s context, music is a tool to break borders between the people.

“When the rhythm of the music starts moving us, we automatically forget our differences,” he said.