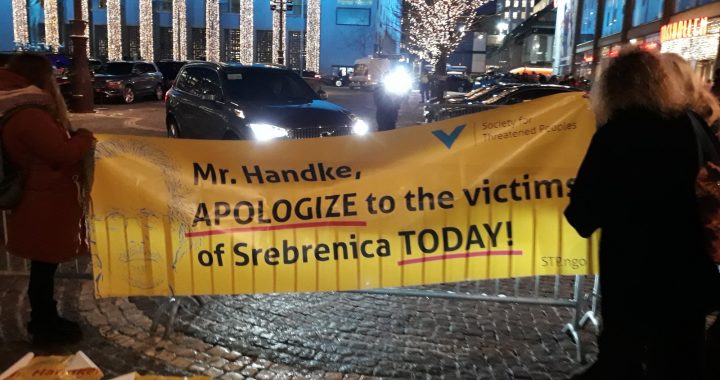 Protesters rallied against the decision to award the 2019 literature prize to Peter Handke. Photo: BIRN.

Officials from both Kosovo and Bosnia and Herzegovina announced on Wednesday that Peter Handke, the controversial winner of the 2019 Nobel Prize for Literature, is ‘persona non grata,’ barring him from entering Sarajevo and Kosovo.

Following the example of officials in Sarajevo, Kosovo’s outgoing Foreign Affairs Minister Behgjet Pacolli announced Peter Handke, winner of the 2019 Nobel Prize for Literature, as ‘persona non-grata’ in Kosovo. Handke was an opponent of the NATO airstrikes against Serbia during the Kosovo War, and spoke in 2006 at the funeral of Serbian leader Slobodan Milosevic.

“Today I have decided to declare Peter Handke as persona non grata in Kosovo because of the support he gave to Milosevic and his genocidal policies in Kosovo and Bosnia and Herzegovina [and the] denial of the genocide committed by Serbia. He and [the] Nobel Prize [organization] showed disrespect to the victims of genocide,” said Pacolli on Twitter.

Handke was awarded the prize on Wednesday by the Swedish Academy despite numerous protests from groups in the Balkans and beyond due to his sympathies for Milosevic. A photo of Handke in Prishtina in front of a display reading ‘Peter Handke in Kosovo’ in cyrillic, allegedly taken in the 1990s, was circulating on social media on Wednesday.

In November, the Kosovo Academy of Science and Arts wrote to the Swedish Academy expressing discontent at awarding Handke the Nobel Prize. The Swedish Academy defended their decision, stating that “the ambition is to celebrate his extraordinary literary work, not the person.”

After Handke received the award in Stockholm on Tuesday, Christina Doctare, a Swedish journalist who received the Nobel Peace Prize in 1988 for her work as a physician for UN peacekeeping forces, announced that she will return her medal to the Swedish Academy in protest.

“I used to be proud of the Swedish Academy but all I feel now is shame and guilt,” she said. “I witnessed the genocide first-hand 27 years ago when I was there. I am going to return the Nobel Prize over the fact that Peter Handke, who denies the genocide that took place in Bosnia and Herzegovina, received it too.”

In Gracanica on Tuesday, a small ceremony was organized by the Gracanica Cultural Center, Matica Srpska, Matica Srpska Library and the Serbian National Theater from Novi Sad to honor Handke, who has often visited Serbian enclaves of Kosovo and left donations.