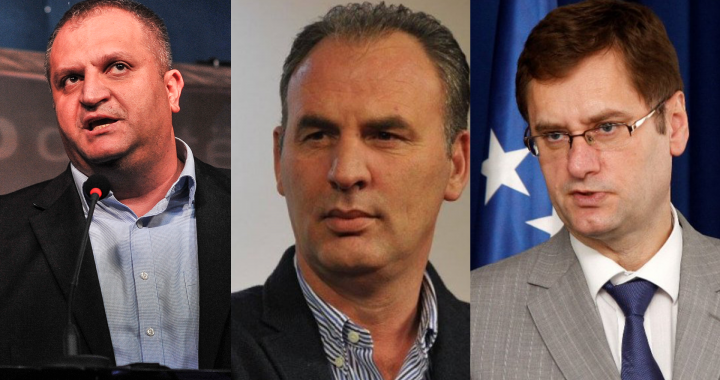 Amid frequent pledges for more transparency in the dialogue with Serbia, heads of the Kosovo negotiating team have travelled to Brussels without notice to the public.

Kosovo heads of the negotiating team for the Brussels dialogue with Serbia, Shpend Ahmeti and Fatmir Limaj, travelled to the EU’s headquarters in Brussels on March 10.

Ahmeti and Limaj were invited by Federica Mogherini, the EU’s representative for Foreign Affairs and Security Policy, according to BIRN sources from the Kosovo government.

Ahmeti and Limaj did not notify the public in advance of their trip to Brussels. The heads of the negotiating team, selected in December 2018, repeatedly claimed that the dialogue will be “transparent.”

BIRN sources said that Limaj and Ahmeti travelled to Brussels to discuss the platform of Kosovo Government on the dialogue with Serbia with Mogherini. The platform was approved at the  Kosovo Assembly on March 7, passing with 61 votes in favor out of a possible 120.

Named “The Platform for the Dialogue on the final agreement with Serbia and legally binding for normalization of relations between Republic of Kosovo and Republic of Serbia,” it includes the principles that the Kosovo government will include in the course of the dialogue with Serbia. One of the key principles of the dialogue remains recognition of Kosovo’s sovereignty by Serbia.

The two major opposition parties at the Kosovo Assembly, the Democratic League of Kosovo, LDK and Vetevendosje, which comprise almost half of Kosovo’s legislature, declined to participate in the voting session on the platform. According to opposition leaders, the platform legitimizes Thaci’s plans on ‘border correction’ with Serbia, which were first introduced by the president last summer.

According to BIRN sources, also in the crew that travelled to Brussels is Blerim Shala, one of the main advisers to the Kosovo president.

The approval of the platform in March sparked reactions from Kosovo’s northern neighbor.

Aleksandar Vucic, Serbia’s president, condemned the platform, claiming that it would bring negotiations to a halt, and shows that Prishtina is unwilling to continue the dialogue with Belgrade.

However, both the European Union and the United States urged for a legally binding agreement that would pave the way for both Kosovo and Serbia to advance further towards the EU integration process.

Currently, the dialogue between Kosovo and Serbia has halted, and negotiations did not resume after Kosovo hiked import tariffs for all goods coming from Serbia and Bosnia and Herzegovina to 100 per cent in November last year. The tariffs continue to be in place, despite the international community urging the Kosovo government to scrap the tariffs.

BIRN contacted Limaj, Ahmeti and Shala to comment on the visit to Brussels but has received no reply. BIRN also contacted Visar Ymeri, one member of the negotiating team, but received no response.

BIRN also contacted Maja Kocijancic, the EU spokesperson for Foreign Affairs and Security Policy to confirm that the meeting occurred and the topics discussed, but has not yet received a reply.