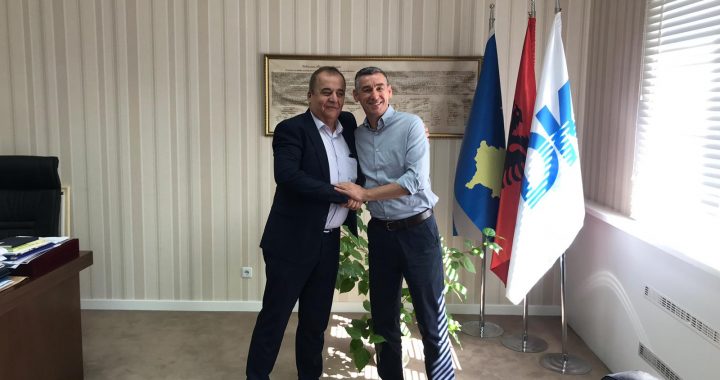 Despite the PDK prime ministerial candidate’s vocal opposition to corruption throughout his election campaign, Kadri Veseli welcomed Sadik Halitjaha, one of 12 individuals indicted in the investigation into the false war veterans registration scandal, as a member of PDK on Monday.

Kadri Veseli, the leader and prime ministerial candidate for the Democratic Party of Kosovo, PDK, publicly welcomed one of the 15 individuals facing prosecution for fraudulently granting monthly pensions intended for veterans of the Kosovo war as a member of his party on Monday.

Sadik Halitjaha, a former commander in the Kosovo Liberation Army, KLA, was indicted in July 2018 for abuse of official position during his time as a member of the Kosovo Government’s Commission for the Verification of KLA War Veteran Status, following an investigation by the Kosovo prosecution into the accusations of fraudulent registration.

Veseli, who has previously spoken openly in support of inflating the list of veterans because there is “political consensus” to do so, welcomed Halitjaha as a member of PDK. “Welcome to our family, Sadik! Join me, to build a better future,” Veseli wrote on his Facebook page on Monday.

In 2018, a report from the Commission for the Verification of KLA War Veteran Status stated that more than 46,000 people participated in the Kosovo war during 1998 and 1999. By August 2018, 39,984 people were receiving the monthly state pension scheme. According to the 2018 state budget of Kosovo, around 81 million euros was allocated to pay for the scheme.

The prosecutor who headed the investigation into the case, Elez Blakaj, resigned and left the country one month after the indictments were announced due to threats he received while carrying out the investigation.

PDK’s leader explicitly announced that the fight against corruption is his party’s key priority during the campaign for the October 6 parliamentary elections, with many labeling the move  as “hypocrisy” because of PDK’s consistent links to allegations of misuse of public office while in power.

Following 12 years of PDK rule across four terms in government, the party has been accused of having installed “endemic” corruption into Kosovo’s government and its public institutions, including by the European Commission in its annual progress reports on Kosovo.

Since 2016, party-affiliated appointments to public institutions have been common, with the international community calling on the Kosovo Government to end its culture of nepotism.

In July, Veseli announced that he would be asking for the resignation of all members of PDK currently under investigation for corruption. Despite this claim, two current indictees for different corruption cases, Adem Grabovci and Sami Lushtaku, are both participating in the organization of PDK’s election campaign this week.