Fresh rolls and not much more at Nama Sushi 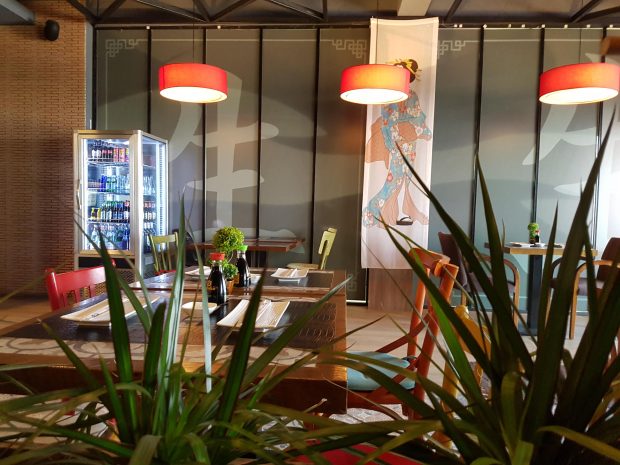 Living in a landlocked country does not provide ample opportunity to devour the freshest seafood. While local river fish are delicious and affordable all over Kosovo, in Prishtina, well-prepared and fresh seafood is generally a sport best left to a few specialized restaurants.

Some of the best seafood restaurants have been operating for years (Hemingway’s comes to mind), but the culinary landscape experienced a boom after the new highway to Albania cut the distance from Prishtina to the seaside to a mere 3-4 hours.

One would expect that these developments would also fuel a rise in affordable sushi – but the Japanese dish made of vinegared rice and raw fish had other cultural obstacles to overcome to become a favorite in a country where the blue steak is an urban myth.

Cue in Nama Sushi, a sushi bar that opened a few months ago next to the International Village neighborhood in Prishtina’s outskirts. A branch of the existing Nama Sushi in Tirana, the restaurant is not the first or only sushi place in Prishtina – Tokyo is still alive and kicking, and Goldfish in the new Arberia also serves sushi – but this could have been an opportunity to spice things up. Yet, with its limited menu of fresh but immemorable rolls, it will probably cater to a niche of people who crave sushi and will settle for a mediocre fix.

The first time I ate sushi in Prishtina was about 12 years ago at Samurai. The restaurant, a hotspot for expats (thousands of whom had descended with the UN administration in 1999), was more an excuse for weekend karaoke screechings than fresh sake rolls. As the number of expats dwindled, so did Prishtina’s ‘exotic’ restaurants – Samurai closed down, and so did the short-lived Indian place on 2 Korriku st., until finally the Chinese restaurant on Luan Haradinaj st. also disappeared.

Today a restaurant like Nama Sushi will have to rely on the purchasing power of Kosovars, which is perhaps why the place is located next to Prishtina’s first gated community.

We visited the place on a work day for lunch – the simple and modern restaurant was entirely empty as we walked in; the chefs and servers bored next to the open kitchen bar. With tables neatly lined and shrubs dividing the room, I could imagine the restaurant being a nice place to dine at night. Scrolls of Japanese calligraphy and a drawing of a woman hung on the walls; with a Bonsai tree and a Buddha statue adding the finishing touches to the room’s oriental decor.

Besides a few types of sushi rolls, the menu offers a variety of tartares for starters, soups and salads, and staple Asian-fusion noodles, including Thai-style ramen. But from the soya sauce bottles on each table, to the Greek-produced chopsticks on the laid out plates – it was obvious that sushi was intended to be the highlight.

I was surprised to find that Nama Sushi’s menu opted out of the thin roll, hosomaki, entirely. Perhaps pedestrian, but the bite sized hosomaki are great for people like me with two left hands and no elegance for chewing large futomaki. In this particular case, the deep fried nori on the futomaki tasted bland, and made it harder to keep the roll together, although the rice was sticky enough and the salmon was fresh.

The uramakis on the other hand were definitely preferable – in particular the California-inspired roll. Substituting the imitation crab (which I could never appreciate) for shrimp, according to the menu this roll consists of avocado, cucumber, special dressing and caviar. Full disclosure: I couldn’t discern the dressing, and I assume the caviar was the tobiko on top; but neither of these things stopped me from enjoying every piece.

The rainbow uramaki was less impressive: after all, it is hard to make a rainbow with only one type of fish. The salmon was fresh, as was the avocado, but the chef had substituted carrots with pineapple and that gave it an extra tang.

While my own choices were pretty conservative, the menu also offers handrolls, temakis, for 2.5 euros each (even a deep fried one), and boat-shaped rolls, gunkan (3-4.5 euros for 2 pcs). If you want to play it safe, or if you’re ordering takeout or delivery, there’s also a short list of mixed menus from 8 to 15 euros, which include nigiri, various rolls, and salmon, tuna, and white fish sashimi.

I left the restaurant satisfied and full, although for Prishtina, a 10 euro lunch per person falls on the pricey side of the scale. Nama Sushi might not be the best sushi I’ve ever had, but the freshness of ingredients convinced me to give it another try once the sushi-jitters kick in.